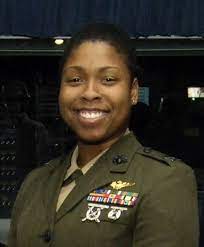 Armour earned her wings in July 2001 becoming the Marine Corps' first black female pilot. She was number in her own class of twelve and number one among the last two hundred graduates. After flight school, Armour was assigned to the Marine Corps Base Camp Pendleton in California to train in the AH-1W SuperCobra.

Before Captain Vernice Armour joined the U.S. Marine Corps, she became the first African American female to serve as a police officer in Tempe, Arizona. Earning her wings in July 2001, Armour was not only number one in her class of 12, but she was also number one among the last 200 graduates. She became the Marine Corps’ first African American female pilot. In March 2003, she flew with HMLA-169 during the invasion of Iraq becoming the Marines first black female combat pilot. She completed two combat tours in the Gulf.

My childhood dream was to be a mounted police officer and ride a horse downtown. By the time I was 21, I had made it ... During my last year of college, I became a motorcycle cop, riding a steel horse. Then I took a step that changed my life. I joined the Marines.

My stepdad had been a Marine, with three tours in Vietnam; my father had retired from the Army Reserve as a major; and in World War II, my grandfather was a Montford Point Marine -- a segregated unit that contained the first Black men in the Corps.

I had no interest in the military. What changed my mind was a flier offering a free trip to the Mardi Gras for anyone who joined the Army ROTC women's rifle team. During ROTC leadership training in New Orleans, I saw a Black woman pilot wearing an Army flight suit. "Why didn't I think of that?" I asked myself.

I never forgot that image. A few months later, I decided that I could always be a cop, but I wouldn't always have the chance to fly. And I wanted to join the toughest outfit. I called the Marine recruiter and told him I wanted to become a combat pilot. I earned my wings in 2001 -- the first Black female aviator in the Corps. 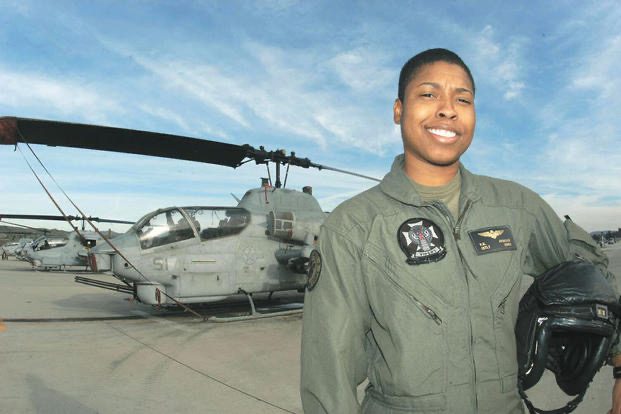 I served two combat tours in Operation Iraqi Freedom -- eight months the first time and seven months the second -- and was recognized by the Defense Department for a second achievement: becoming the nation's first Black female combat pilot.

We flew close air-support and convoy escorts in AH-1W SuperCobras, spending the night at forward operating bases in hostile territory. Often, we returned to our base in Kuwait with bullet holes in our helicopters. It was an exhilarating -- and rewarding -- experience.

Back in the states at Marine Corps headquarters, I entered a new world as a diversity officer and a liaison to the Pentagon. Speaking at conferences made me realize that people really wanted to hear about my Marine Corps experiences, and I loved sharing them.

I also realized that I couldn't give this my all and still provide what the Marines demanded, and deserved. So in August 2007, I left the Corps to start my own firm, helping companies and organizations improve their leadership practices and bottom-line results.

My company, VAI Consulting and Training, LLC, in Stafford, Virginia, has a list of clients that includes banks, defense contractors, nonprofit organizations and even the Department of Defense. I view myself as a professional speaker and consultant.