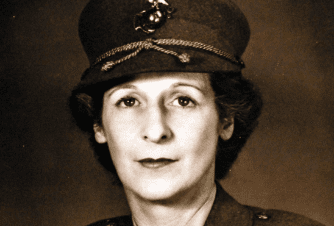 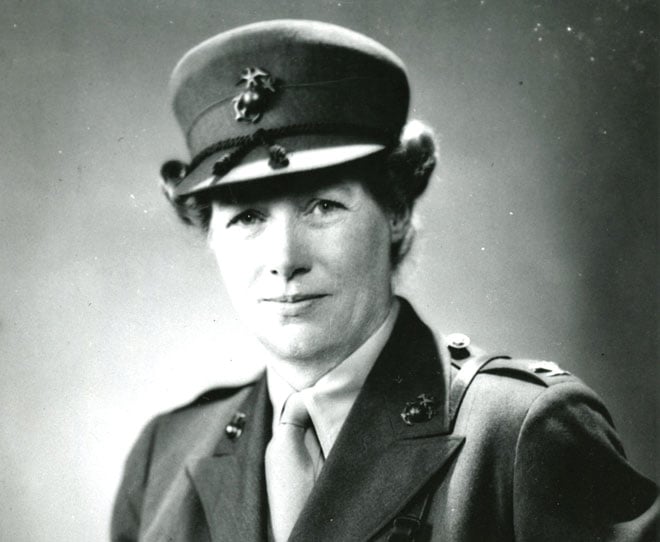 With the United States deeply involved in World War II, the AAGPBL was established to provide entertainment and boost the nation’s morale.  Highlighted a few of the Marines who participated in the ground-breaking AAGPBL. 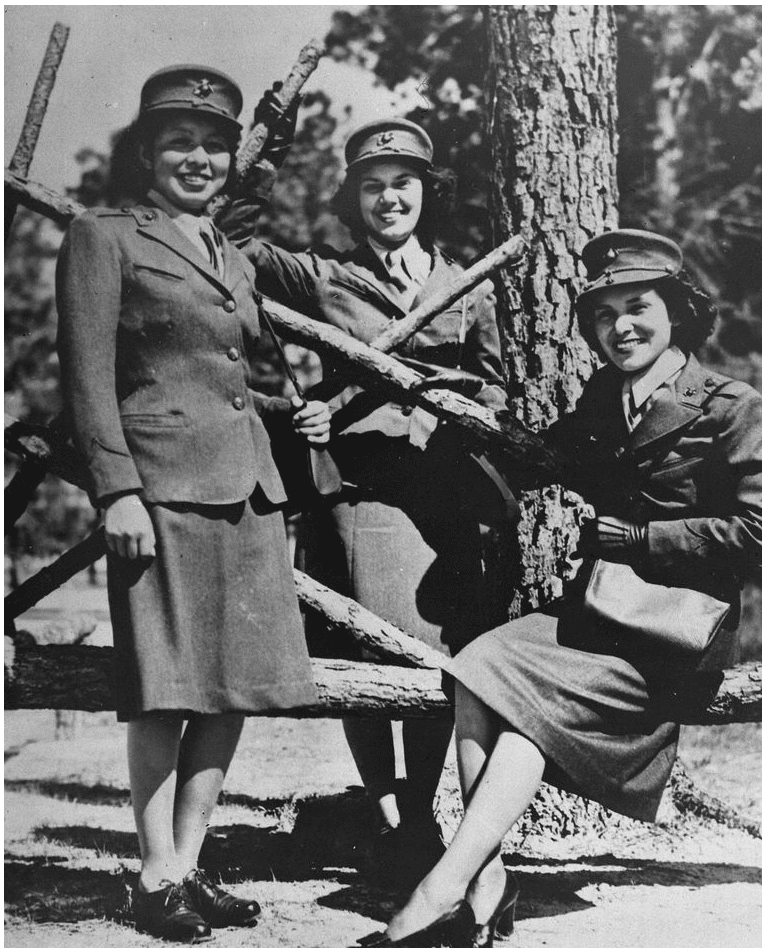 Demobilization procedures for women called for the mandatory resignation or discharge of all Women Reserves to be completed by 1 September 1946.

Division of Reserve was responsible for recruiting all Reserve personnel. When the decision to organize the Marine Corps Women's Reserve (MCWR) was made, it was also placed in that section. Up to this point, it had nothing to do with training, but it inherited all matters pertaining to the Women's Reserve, including training, uniforming, and administering.

Division of Reserve accomplished its first mission, the selection of a suitable woman for the position of Director of the MCWR when the eminently qualified Mrs. Ruth Cheney Streeter was commissioned a Major and sworn in by the Secretary of the Navy on 29 January 1943.

Major Streeter was not, however, the first woman on active duty in the Marine Corps during World War II. A few weeks earlier, Mrs. Anne A. Lentz, a civilian clothing expert who had helped design the uniforms for the embryonic MCWR, was quietly commissioned with the rank of Captain. She had come to Headquarters Marine Corps on a 30-day assignment from the Women's Army Auxilary Corps (WAAC) and stayed.

A vocal contingent continued to doubt the usefulness of female Marines – including Brig. Gen. Gerald C. Thomas, director of the Marine Corps’ Division of Plans and Policies. In an October 1945 memo, Thomas wrote: “The opinion generally held by the Marine Corps is that women have no proper place or function in the regular service in peace-time. The American tradition is that a woman’s place is in the home.”

Women's Armed Services Integration Act of 1948 authorized 100 regular Women Marine officers, 10 warrant officers, and 1,000 enlisted in a gradual build‐up over a two year period with regular candidates coming from Reserve Women Marines on active duty or those with prior service not on active duty.

As many as one in four Native American women found work on assembly lines and factories in faraway cities. Defense companies trained women for welding and machine-shop jobs, and thousands worked in aircraft and other defense plants on the West Coast.

With a shortage of male labor, Native American women on reservations confronted new challenges and embraced novel opportunities. In Wisconsin, Menominee women worked in their nation’s sawmill. Pueblo women drove trucks, hauling freight. For some, wartime meant joining a domestic defense unit. Said one Ojibwe woman, “We have rifles, we have ammunition, and we know how to shoot.”

In Hawaii, the women worked much the same as in the States, with most assigned to clerical jobs. More than a third of the women at Ewa came from the Marine Corps Air Station, Cherry Point, and lost no time before picking up their tools and working on the planes.

At Pearl Harbor, the WRs ran the motor transport section, serving nearly 16,000 persons a month. Scheduled around the clock and with a perfect safety record, they maneuvered the mountainous roads of Hawaii in liberty buses, jeeps, and all types of trucks carrying mail, people, ammunition, and garbage. Marines easily became accustomed to the sight of women drivers, but never quite got used to grease-covered female mechanics working under the hood or chassis of two-and-a-half-ton trucks.

The Deputy Commander, Headquarters, Fleet Marine Force, Pacific, gave the WRs high marks for their efficiency, attitude, and enthusiasm, and reported: "The work of Women's Reserve personnel trained in Marine Corps Specialist Schools has measured up to the standard of performance required of men in specialists' assignments, such as Quartermaster Supply Men, Radio Operators, Radio Repairmen, Financial Clerks, Drivers, and Mechanics."

By the summer of 1945, there were 21 officers and 366 enlisted Women Reservists at Ewa, and 34 officers and 580 enlisted women in the Women's Reserve Battalion, Marine Garrison Forces, 14th Naval District. Some stayed to process the men being shipped through Hawaii on their way home for demobilization, but they were all back in the States by January. Because women serving overseas accumulated credits for discharge at the rate of two per month, compared to one per month for those in the United States, most were eligible for discharge soon after V-J Day.

Master Gunnery Sergeant (retired) Helen Campbell enlisted in the Marine Corps in 1943, completing her active duty enlistment in 1946 and joining the reserves. After her active duty time, Helen got involved with the AAGPBL, serving as a team chaperone for the Muskegon Lassies where she arranged the team’s housing and transportation, provided uniforms, and delivered paychecks to the players. She supported the AAGPBL until she was recalled to active duty to serve in the Korean War. She retired from the Marine Corps in 1975. 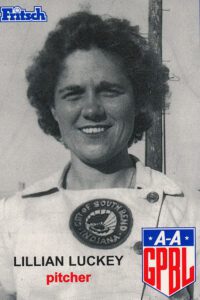 Charlene Pryer was a utility player for the Muskegon Lassies, the Kalamazoo Lassies, and the South Bend Blue Sox, playing in the AAGPBL from 1946 to 1952. She was an All-Star and a two-time League Champion. She enlisted in the Corps in 1944 and served for 28 months. 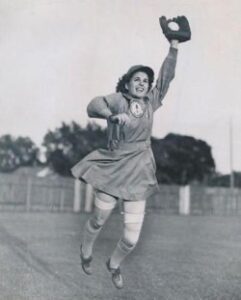 Jackie Kelley was a utility player and pitcher for several AAGPBL teams. In her baseball career from 1947 to 1953 she was an All-Star and League Champion. After her playing career, Jackie joined the Marine Corps, serving for two years.

No Picture for Jackie Kelley

Colonel Ruth Cheney Streeter, the first Director of the United States Marine Corps Women's Reserve, died 30 September 1990 in Morristown, New Jersey. She earned the Legion of Merit for "outstanding services" during World War II and served from the time the Women's Reserve was activated on 13 February 1943, until 7 December 1945, when she resigned her commission.

The colonel was awarded the Legion of Merit on 4 February 1946. The accompanying citation states in part: "Exercising judgment, initiative and ability, Colonel Streeter rendered distinctive service in directing the planning and organization of the Women's Reserve of the Marine Corps and skillfully integrating women into the basic structure of the Corps, carefully selected, trained and properly assigned them as replacements for men in shore establishments."

Born 2 October 1895 at Brookline, Massachusetts, Colonel Streeter attended schools abroad and graduated from Bryn Mawr College at Bryn Mawr, Pennsylvania, in 1918. During the depression years following 1930, she worked in public health and welfare, unemployment relief and old-age assistance in her home state of New Jersey. She was one-time President of the Welfare Board in Morris County, New Jersey. She also served as a member of the New Jersey State Relief Council, New Jersey Commission of Inter-State Cooperation, and New Jersey Board of Children's Guardians.

Long interested in aviation, the colonel completed a course in aeronautics at New York University and served as adjutant of Group 221, Civil Air Patrol. She learned to fly in 1940 and in 1941 became the only woman member of the Committee on Aviation of the New Jersey Defense Council. The same year she also acted as chairman of the Citizen's Committee for Army and Navy, Inc., for Fort Dix, New Jersey. She received her commercial pilot's license in April 1942.

Colonel Streeter was the first woman to hold the rank of major in the Marine Corps. She was appointed to that rank on 29 January 1943. She was promoted to lieutenant colonel on 22 November 1943, and to the rank of colonel 1 February 1944.

When Colonel Streeter left the Marine Corps in December, 1945, General A.A. Vandegrift then Commandant of the Marine Corps, wrote her a commendatory letter, which is quoted in part:

"…It is with deep regret that I contemplate your leaving, and I cannot let the occasion pass without conveying to you some expression of my admiration and appreciation of your outstanding service as Director of the Marine Corps Women's Reserve from its inception in January 1943 until the present time.

"Over that period, the Marine Corps Women's Reserve grew in size to a maximum strength of 831 officers and 17,714 enlisted. It set a standard of excellence which, in my opinion, could not have been excelled and would be difficult to equal."

Colonel Streeter is joint donor with her mother of the Cheney Award, given annually to some member of the United States Air Force for "acts of valor or extreme fortitude or self-sacrifice." The award commemorates the memory of Lieutenant William H. Cheney, the colonel's brother, who was killed in an aviation accident in World War II.

In addition to the Legion of Merit, Colonel Streeter's medals include the American Campaign Medal and the World War II Victory Medal.