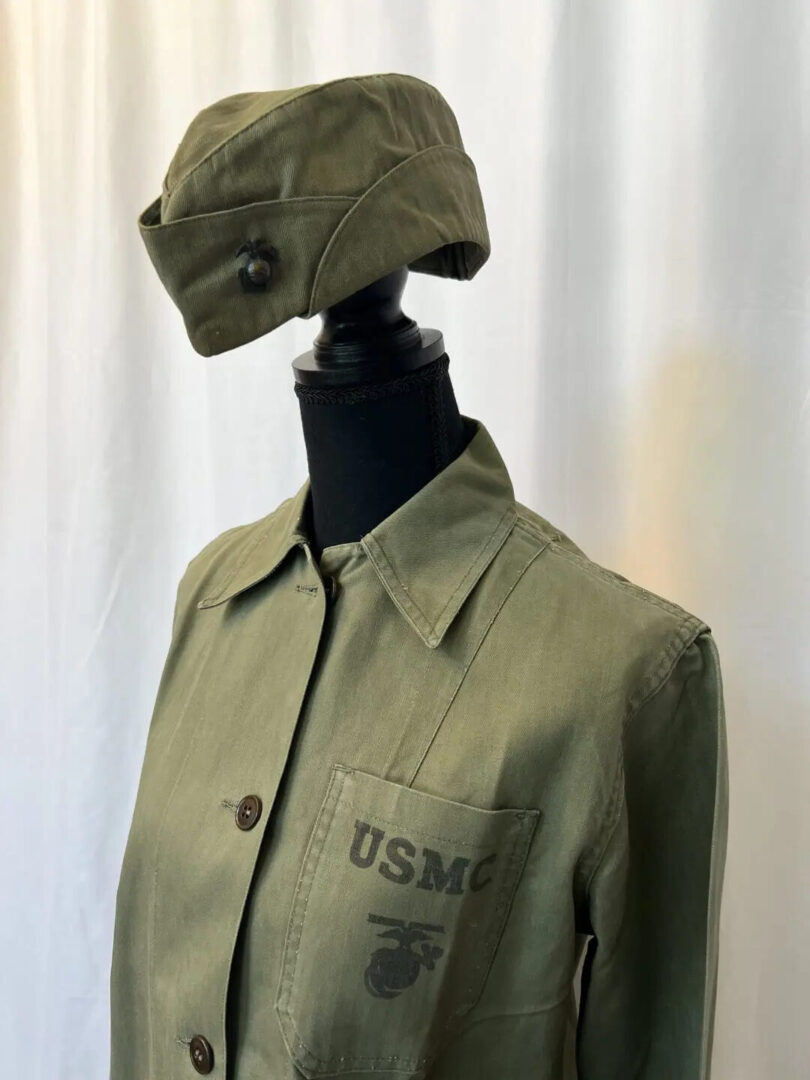 This uniform originally belonged to 1st Sergeant Frances A. Curwen. 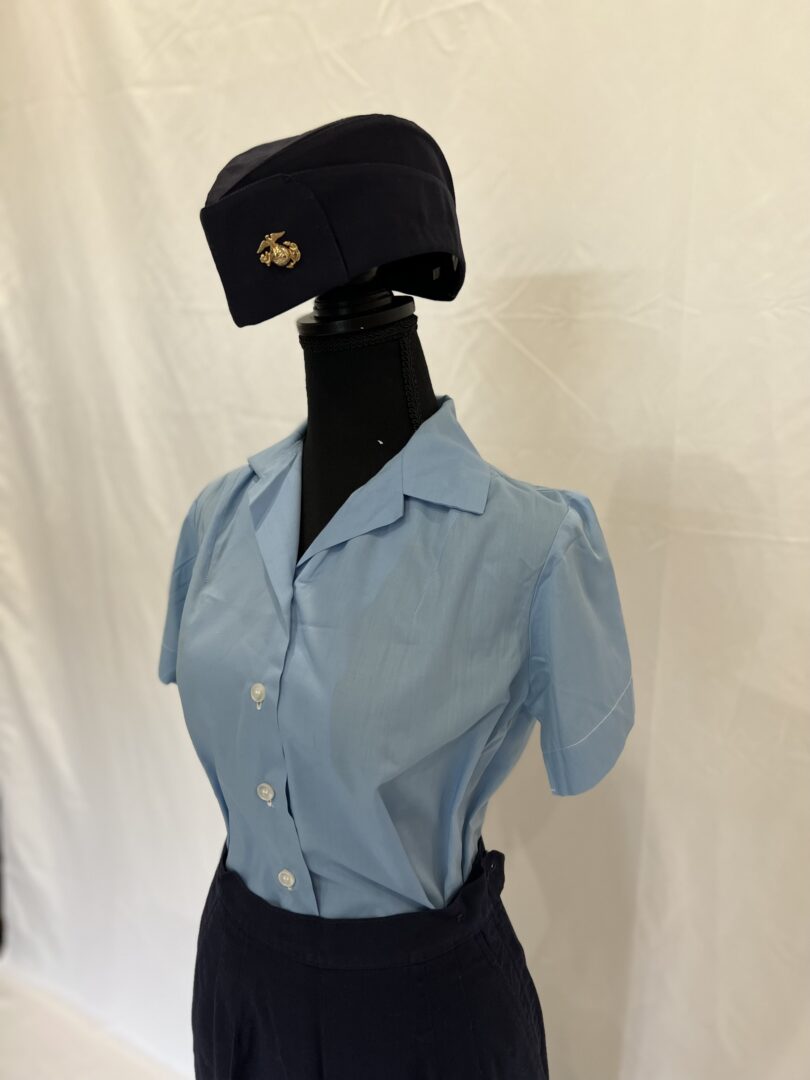 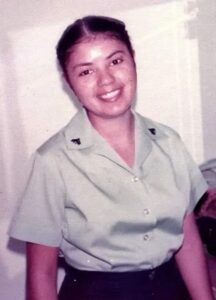 The standardization of uniforms by the four services resulted in a common blue uniform utility. This uniform originally belonged Mary Ortiz-Dvorak. 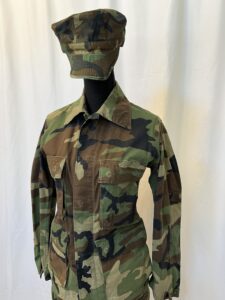 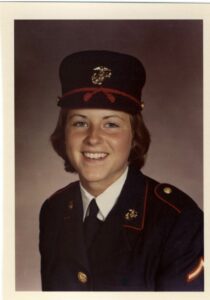 Utilities - cover slacks (work uniform) most common was the olive drab, utility uniform. The trousers were tied by a bib front and long cross straps in the back. A short sleeve, matching shirt was worn underneath, and a long sleeve jacket overall.

The utility uniform was not a mandatory requirement; however, it was available to individual women Marines who had “dirty” jobs like motor transport (MT). Made of lightweight sage green cotton and modelled on the men’s three -pocket HBT Utility coat, it had three patch pockets, two lower and one top left, the same as the man’s, with the black EGA/USMC pocket stencil.

Sergeant Frances A. Curwen (Bilski), Retired was retrieved from, A History of the Women Marines 1946-1977. No additional history/information is known. Mail clerk from August 1943 until September 1946 at the fleet post office in San Francisco.

In 1949, former WR Staff Sergeant Frances A. Curwen was selected to be part of the Boston unit, one of the first seven WR platoons to be trained to meet mobilization needs of the Marine Corps. Designated women's Reserve platoons (WR platoons), were attached directly to the major parent male unit as an organic element (e.g., WR Platoon, 11th Infantry Battalion).

Mobilized for the Korean War, TSgt Curwen was the only female postmaster in 1952 and supervised the Montford Point Branch, Camp Lejeune Post Office. Following the war, she was a member of the VTU, and as an instructor at the Marine Corps East Coast Postal School in 1952. On 19 January 1953, Technical Sergeant Curwen (later Bilski), hand selected to be an instructor, was an instructor for the first class of Staff NCO Leadership School for women since 1945. The Staff NCO Leadership School for women was convened Camp Lejeune. In the early 1960s, after having served as postmaster at Parris Island, she was ordered to similar duty in Hawaii, but the command absolutely refused to have a woman in the job, saying that the mail bags were too heavy for a female. In the late 1960’s, Gunnery Sergeant was one of many drill instructors. Picture below GySgt Curwen teaching a typing course in the early 1960s to recruits at Parris Island. See picture. The standardization of uniforms by the four services result it in a common blue outfit, dark blue slacks, cap and sweater, and a light blue shirt. Recruits received the new blue Utilities in July 1967 and the green ones were not permitted after 1971. At first, the black insignia of service was worn on the blue cap but the dark liked contrast and gold emblems were adopted on utility cap in 1970. On 22 September 1975 they come on authorized and interim-measure, supplementary allowance of male utilities to women to be worn under restricted conditions dependent under jobs.

The standardization of uniforms by the four services resulted in a common blue uniform utility outfit, dark blue slacks, cap, and sweater, and a light blue shirt. Recruits received the new blue utilities in July 1967 and the green ones where not permitted after July 1971.

The new uniform while more feminine in appearance, was never truly accepted. Black insignia of service was worn on the blue cap but the dark color lacked contrast and the gold emblem was adopted on the utility cap in 1970. In 1977, the wearing of male camouflaged field uniform was authorized. The boots replaced the black oxfords and cushion-sole socks took place of anklets. In 1977, wearing of male camouflaged field uniforms (cammies) by all women Marines was approved. In 1979 the production of the utility camouflage in smaller sizes to be issued to women Marines began. Combat boots replaced oxfords and cushion-sole socks took the place of anklets for Women Marines. 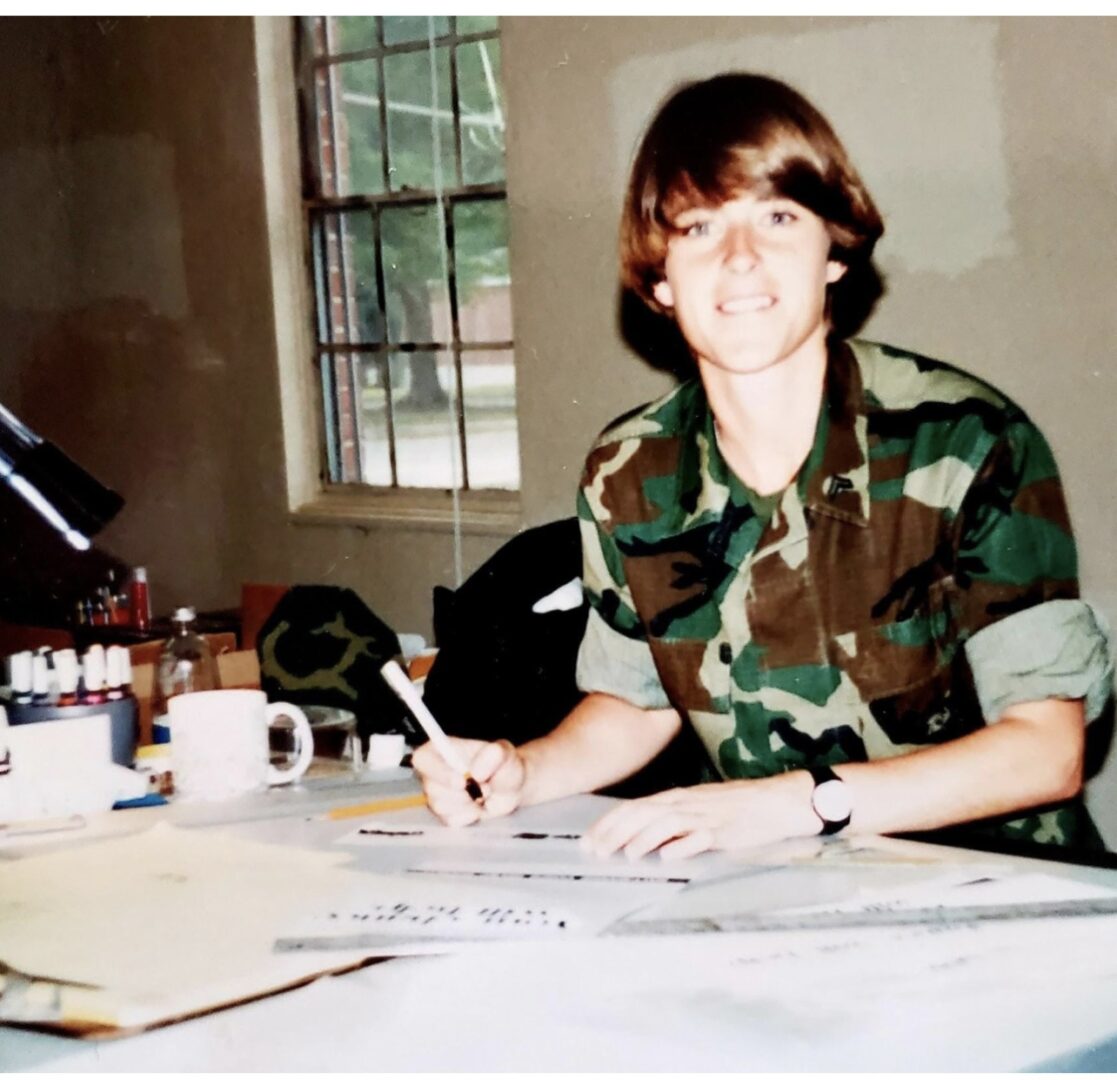 In 1977 General Wilson approved wearing of male camouflaged field uniforms (cammies) by all women Marines. In 1979 the production of the utility camouflage in smaller sizes to be issued to women Marines began. Combat boots replace the Black Oxford‘s and cushion so socks took the place of anklets for women at work in certain jobs and then training.

This uniform originally belonged to Sgt Heidi Joan Larson. Graduated Boot Camp Nov 1975. Selected as Molly Marine and Honor Grad for both platoons: 9A and 9B. Her Duty station: Camp Pendleton, CA MOS Graphic Illustrator 4611 (4900 field first and changed). Left active-Duty September 1978. Entered the USMC Reserves at South Weymouth Naval Air Base as a PAO. Attended college and graduated with a BFA in Design 1983 from Massachusetts College of Art and Design. Received Masters and Teaching certification and started teaching. Reenlisted and assigned to Camp Lejeune in 1990 during the Gulf War Conflict. She was assigned her original MOS 4611. MOS was being dissolved, there were NO promotions in field. Requested early release to return to teaching. Has been teaching ART ever for 30th year in education Her future plans are to retire as the Director of Art and Design from Braintree Public Schools June of 2022. Combat boots replaced oxfords and cushion-sole socks took the place of anklets for Women Marines. In December 1979, a camouflage utility uniform, referred to as “cammies,” replaced the blue utility uniform for women and green sateen utility uniform worn by men. 1980 - female enlisted Marine wearing the older-style poplin camouflage utilities.