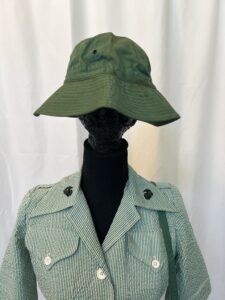 This Service Summer uniform with the first headwear for the summer service uniform. This uniform made of green and white striped material Seersucker material. 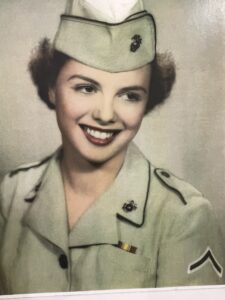 This uniform is made of polyester-cotton. The long sleeve blouse with a skirt became available.

Women officers did not wear rank insignia on this new summer caps. This was changed in October 1971.

The old-style uniform became obsolete and could no longer be worn after 1 July 1972.

The service summer uniform consisted of two-piece including a blouse and skirt made of green and white striped material, originally Plisse Crepe but later replaced by Seersucker. (A thin, puckered, all-cotton fabric, commonly striped and very common for summer clothing.) The jacket had shoulders straps of same material, each fastened by a single button. Buttons for the jacket were white bone or composite. Headwear for the summer service uniform was initially the bright green hat, which was replaced in 1944 by the Summer Garrison Cap.

The first headwear for the summer service uniform was a round-brimmed Daisy Mae' made of spruce green cotton twill. 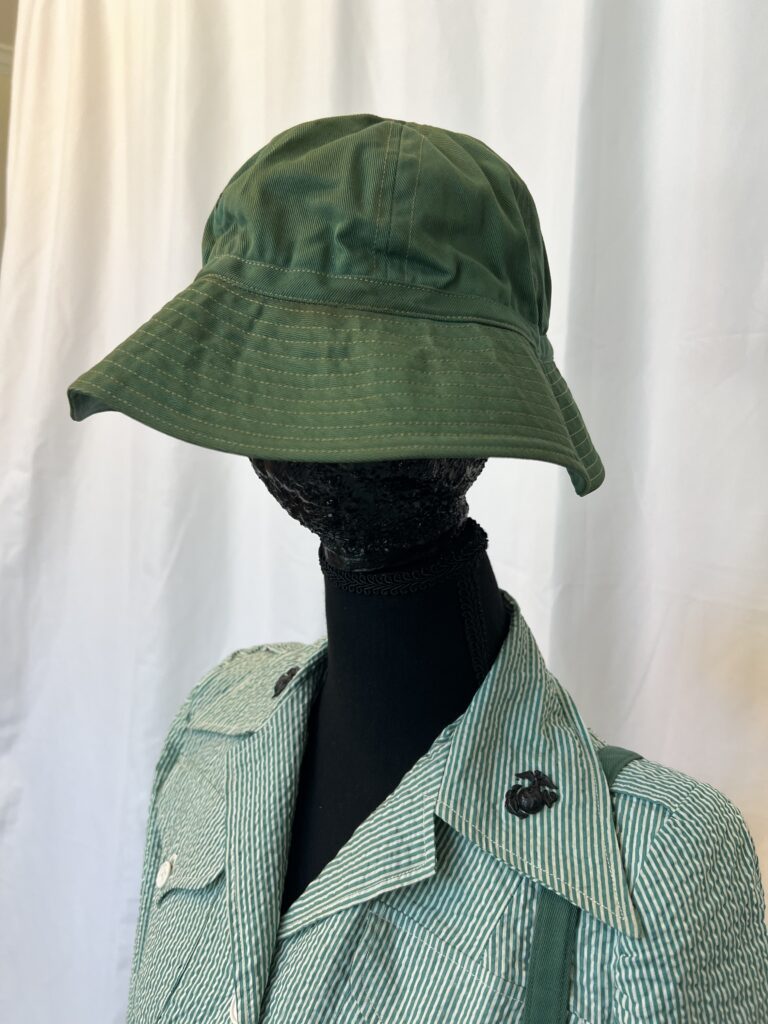 The service summer uniform consisted of a two-pieces including a blouse and skirt made of green and white striped material Seersucker. (A thin, puckered, all-cotton fabric, commonly striped and very common for summer clothing.) The jacket had shoulders straps of same material, each fastened by a single button. Buttons for the jacket were green compose with standard Marine eagle/anchor facing. When realized that officer rank insignia was hard to see on the shoulder strap, officers were authorized to wear shoulder boards of spruce green material fastened by the shoulder strap button and by the rank insignia at the shoulder. Headwear the Summer Garrison Cap and Summer Service “B” and “C” the Green Cover. The handbag was spruce green cover and shoulder strap.

In 1952, the service summer uniform was a one-piece dress uniform with its band at the waist. Made of nylon-dacron-cotton. The dress, skirt, and cap had to match. The jacket had shoulders straps of same material, each fastened by a single button. Buttons made of green compose with standard Marine eagle/anchor facing. Washing ease and wrinkle free resistance were the chief features of the new summer fabric. Unfortunately, the fabric became scarce and expensive, and the Marine Corps had to consider a material shared by the other services since the bulk ordering reduced the price. The handbag was black with black straps. 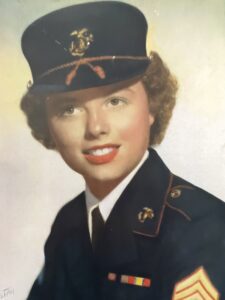 Charlotte M. Ayers was born and raised in Neillsville, WI.  After high school graduation, she enlisted in the U.S. Marine Corps on 16 Oct 1952 and received her recruit training at Parris Island, SC,  In Jan 1953 Pvt Ayers attended the Clerk-Typist Course on PISC, and in Mar 1953, she transferred to MCB, Camp Lejeune, NC, and was assigned to the Base Adjutant’s office through Jul 1954.

Charlotte’s next duty station was the Naval & Marine Corps Reserve Training Center, Fort McHenry, Baltimore, MD, on the Inspector-Instructor Staff.  Capt Joann McLamore and Cpl Ayers were in charge of the Women Marine Reserve Classification Platoon of the 1st Engineer Battalion.  In addition to her administrative duties, Charlotte also served as an Instructor for the women’s classes in military subjects, and drill.  Sgt Ayers and Capt McLamore escorted the Platoon to its annual training at MCRD, Parris Island SC for three years.  In Feb 1956, Sgt Ayers attended the NCO Leadership Course in Quantico, VA, returning in Mar 1956 to Fort McHenry and resuming her duties.  Sgt Charlotte Ayers received her Honorable Discharge from the Marine Corps on 15 Oct 1957.

Then came marriage to a Marine, moving often due to his orders, the births of their three children, being a single mom during his overseas tours, and her husband’s retirement from the Marine Corps in 1973.  They settled in Beaufort, SC.  Charlotte received an Associate Degree in Secretarial Science in 1974.  From 1974-1981, Charlotte was secretary to the Facilities Maintenance Engineer Officer on Parris Island.  From 1981-1983 she was the Secretary to the XO, Beaufort Naval Hospital, and in 1983 was selected for the Credentials Coordinator position.  Upon retirement in Jan 1998, she received the Meritorious Civilian Service Medal, the highest civilian award given.

Without a Marine Corps Reserve unit in the area, Charlotte, at the age of 47,  enlisted in the Naval Reserve, but because the Reserve was not taking prior service personnel at that time, she had to join as a Seaman (E-3).  After attending Yeoman’s Course in Pensacola, FL, YN3 Ayers’s annual active duty training was held at Naval Bases on the east coast.  In 1987 YN1 Ayers performed her annual active duty with Special Operations Command, Europe (SOCEUR) during exercise Wintex-87 at Patch Bks, Vaihingen, Germany.  The Joint Operations Cmd which she worked in was composed of all branches of the Armed Forces from over 7 different countries.

In 1990 YN1 Ayes had orders to Holy Loch, Scotland - no base, just submarine tenders which refit, repair, and resupply submarines patrolling the North Atlantic area.  Naval personnel were housed in the town of Sandbank.  At the completion of this annual training, YN1 Ayers received the CO’s Commendation Certificate for her Outstanding Performance.  In 1992 and 1993, YNC Ayers’ annual active duty was at HQ US-European Command in Stuttgart, Germany, where she worked in the Middle East/African Division.

With fifteen years of service in the Naval Reserve and her five years of active duty in the Marine Corps, Charlotte retired as a Yeoman Chief, U.S. Navy, in Jan 1996.

In Oct 1998, when Charlotte was 64 years, she joined the 3rd Brigade of the South Carolina State Guard (SCSG) with the rank of 1st Lt.  These are volunteer citizen-soldiers who serve as a backup force to the S.C. National Guard, focusing on disaster relief, emergency preparedness and civil defense.  The SCSG follows the military chain-of-command but it’s ultimate commander-in-chief is the governor.  Rank is initially based on background, experiences, training, education; military service is not required.  Charlotte, the S-1 officer, was promoted Dec 2000 to the rank of Captain.  Weekend drills were held at the National Guard Armory and FTX’s on military bases within S.C.  At the mandatory age limit of 70 in Feb 2004, volunteer Capt Ayers retired from the SCSG.

In 2004, Charlotte founded the local chapter of the Korean War Veterans Assoc (KWVA) and served as its first President.  She ran and was elected a Director of the National KWVA from 2007-2010. 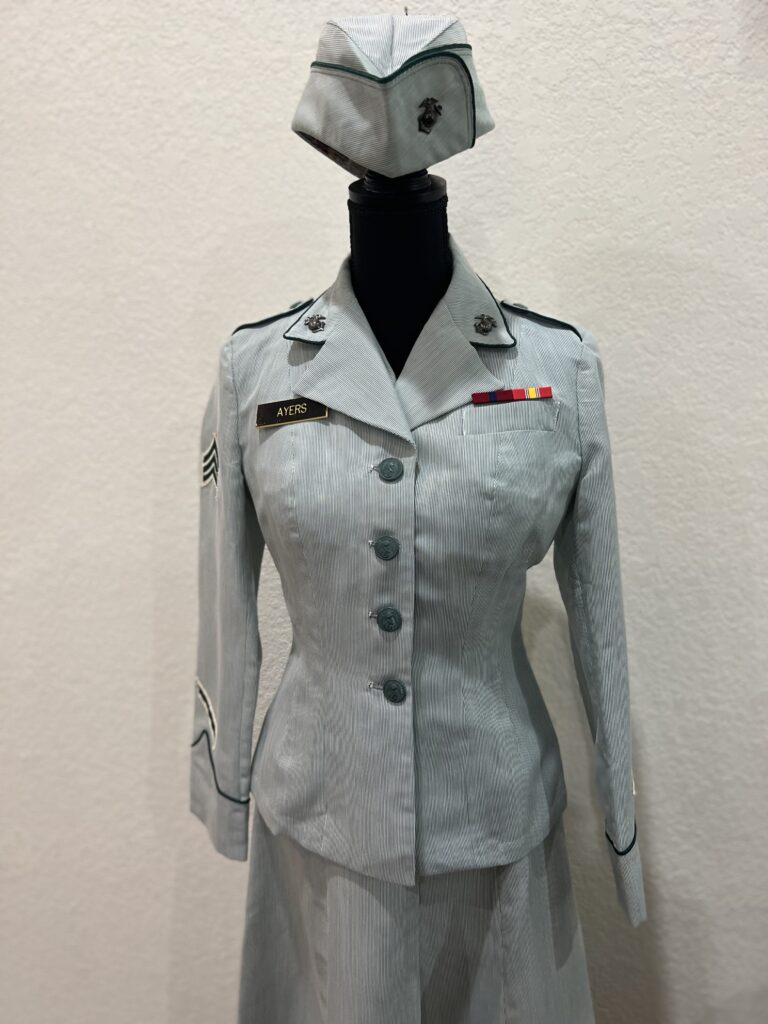 In 1966, an entirely new two-piece dress made of the same polyester-cotton, corded, green-and-white striped material was approved. Recruits began to receive it in July 1967. The Summer Garrison Cap was still the headgear but in 1966 the Summer Service “B” and “C” consisted of wearing the Green “bucket” Cover. Another change involving summer uniforms was seen in 1966 when women officers were authorized to wear the summer dress cap, a bright green version of the winter service and dress blue cap, as an optional item when on leave or liberty. When worn with summer uniform, bronze buttons and insignia were worn rather than gilt buttons and dress insignia. Field grade officers, if they elected to wear the dress cap with the service uniform, were required to wear one with a plain visor, without gold embroidery.

In 1969 the long sleeve blouse with a skirt became available. The regulations were broadened and officers could wear the dress cap on an everyday basis except when in formation. This privilege was extended to staff noncommissioned officers in 1971.